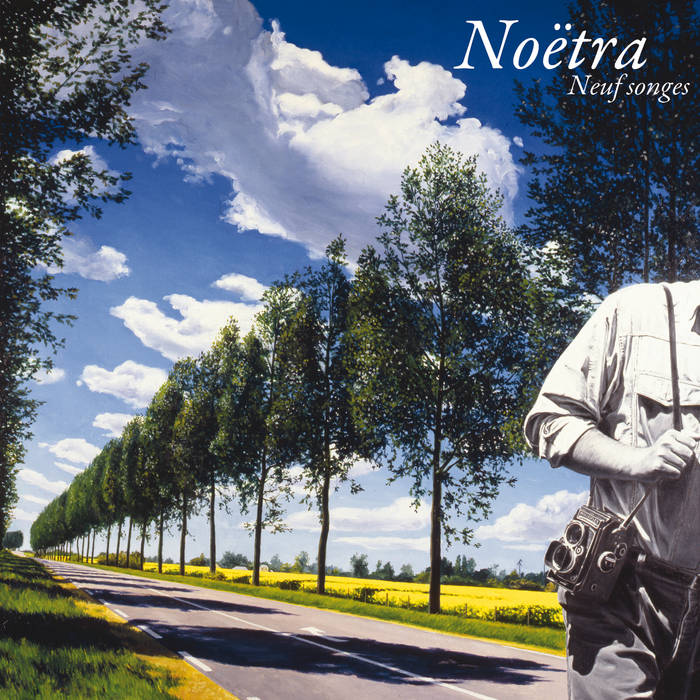 Sven B. Schreiber Oh, I just love this album! It's one of the best of its kind. With its versatile arrangements for woodwind, brass, and strings, it uses the established sound recipes of the RIO genre, sometimes coming pleasantly close to the feeling of the first two "Magma" albums. However, the permanent presence of Jean Lapouge's electric guitar gives it a unique groove, which makes it something special among comparable works. Favorite track: À prétendre s'en détacher.

For those who would be interested in behind the scenes of the release of the 4 Noëtra' CDs please click on that link: jeanlapouge-english.blogspot.com ...
Jean Lapouge

French band from Creyssensac, found by guitarist Jean Lapouge in 1976, at a time when he had sufficiently developed his composing skills.He was accompanied by his longtime follower Daniel Renault on drums along with bassist Denis Lefranc and Christian Paboeuf on wind instruments.A first demo was recorded in winter 1978/1979, followed by an album, ''Neuf songes'', which was handed to ECM in chase for a contract, that never became true.However the material along with some other recordings was collected by Musea Records and released in 1992 in CD format.
With an expanded line-up including seven guest musicians on brass/wind/string instruments and Lapouge presence always on the forefront, ''Neuf Songes'' explores the boundaries of Chamber Music, Jazz-Rock and RIO, around the time Lapouge was inspired by the music of HENRY COW, MAGMA and EBERHARD WEBER.One can find several different orientations in Noetra's arrangements.The guitar-dominated parts turn from energetic Jazz-Rock to harmonic Chamber Rock in a blink of an eye with the light support of violins, cellos and flutes, always offering some fine interplays and a deep atmosphere.But there is a strong tendency towards Modern Classical music among Lapouge's ideas with dominant use of trombones, saxes, clarinets and oboe, eventually coming up with a small orchestra performing delicate Chamber Music.But also much of the material stands somewhere inbetween the two styles, where a dynamic rock section with a jazzy edge leaves its place to the Classical-influenced solos of the string and wind section.Overall this is over 70 minutes of compelling and highly adventurous musicianship with a great technical level.
In Lapouge's biography the listener can find the reason this material was never originally released.It turned to be some of the album's technical flaws, but the general deep and ''difficult'' approach allows some.Thanks to Musea the album has seen the light over a decade later and comes up as an effort, which fans of the aforementioned styles are sure to appreciate. Recommended stuff.

Prolusion. The French ensemble NOETRA was first and foremost the creative vehicle of composer and guitarist Jean Lapouge. Active in various line-ups in the late 1970's and early 1980's, Noetra was the band that almost made it. ECM were initially interested in signing them, but as more material was produced the interest declined, and while the band did carry on until 1985 they never managed to release anything when active. Enter Musea Records, which some years later managed to convince Lapouge that the material recorded back then was worth releasing on CD. At the time of writing the end result of this process has been that material for three full length productions have been salvaged from Lapouge's archives.
Analysis. The first Noeta album, "Neuf Songes", is an intriguing but also fairly demanding production to get into. Especially for those less accustomed to material drawing directly upon classical music in general and chamber music in particular for inspiration, and if you're not overly familiar with jazz either this is a disc that will demand a bit more attention from you than you'd normally have to invest when listening to an album's worth of music. The key element throughout isn't a demanding one as such admittedly, as Lapouge's light toned and mostly gentle guitar motifs revolve around subtle details and careful exploits rather than dramatic excursions and flamboyant showmanship as such. While less visible and frequently taking a back seat as far as the dominating spots go, his guitar motifs are the heart and soul of this production, the gentle recurring element and underlying feature that unites everything else that's ongoing. Which at times is a lot. The compositions themselves aren't overly uniform in expression. Quite a few compositions include the occassional jazz-oriented detail, but while this is an important element, the dominating and overall style of this production has its heart and soul closer to classical music. Opening piece and title track Neuf Songes emphasizes this quite nicely with its light toned, uplifting and vibrantly positive take on the chamber rock genre, the following Le Voyageur Egare se Noie Incognito contuining in that vein in a shorter and arguably truly brilliant manner. The chamber and classical music inspired tendencies stick through from these opening pieces until the very end, through careful, melancholic constructions emphasizing the mellower side of that expression to energetic, pace filled takes, with sparse arrangements giving ample room for the individual instruments to shine as well as rich displays featuring arrays of instrument motifs in tight harmonic interaction. A Pretendre s'en Detacher is a nice example of Noetra exploring the gentler aspects of their repertoire, while the stunning triple themed Printemps Noir is a good showcase for the band's more forceful displays. Concluding this CD we have the six part creation Periodes, arguably the most vibrant display of the band venturing closest to the classical music universe and an excellent demonstration of how to utilize dark and light timbres to create a strong and distinct nerve as well as employing themes that invite to contrasting emotional associations to sustain it.
Conclusion. While not without minor flaws, Noetra's “Neuf Songes” is a production that clearly merited a CD release. Fans of chamber music and chamber rock appear to be the main audience for this production, and in particular those with a taste for music of this kind closer to classical music than rock should find this album to be one that merits an inspection.

If Miriodor sounds like Univers Zero in a good mood, Noetra then sounds like Univers Zero in a terrific good mood. There is some wonderful music in there. To a quartet of guitar, oboe/recorder, drums and bass/tuba are added violin, clarinet, soprano and tenor sax, flute, cello, trombone and alto violin. The melodies are not dissonant, but also reflects creative harmonies that varies from somber moods to bright expressions. The pieces are often based around apperggio-styled Jean Lapouge's textural guitar playing. They reflect some chamber music at times. And they also sound rockier at other times. If there's a class of artists/bands that are clean of any gimmicks to concentrate on the beauty of music, Noetra is certainly amongst them. Highly recommended! More than 60 minutes of a very fine music.

This was the very first release, recorded 1979-81 of this wonderful chamber progressive band who use guitar, oboe, violin, clarinet, saxes, flutes, bass & drums. A gentle, beautifully scored sound that sounds like a completely original cross between Julverne & Miriodor and prime-era ECM (late 1970s). This was originally released about 20 years ago, and it has been out of print for about a decade and I very happy that this was reprinted again. All three of their archival/posthumous releases are great, but this one is my favorite by a couple of noses, and if you don't know them and want to know where to start, start here! Highly recommended.

Truly splendid, a gem of French chamber progressive rock. Sophisticated songwriting, elegant, with the oboe often taking the lead. The title track and “Périodes” are beautiful multi-movement compositions reminiscent of early Maneige, a bit of Conventum, a dab of Anthony Phillips, and the aura of Art Zoyd. Excellent sound for an archival document, and the best of all the posthumous Noëtra releases.

This is an album that not very many people talk about, which is a shame, because it is a fantastic CD. I usually listen to CD's while sitting at my computer and often times get caught up in reading or typing, and forget what is playing. What I initially think of an album is highly influenced by how much it grabs my attention with something interesting and beautiful, and makes me say "wow, this is great, what am I listening to again?". The music has a certain amount that sounds similar to Jean-Luc Ponty's better material. But, it is more complex than that, with elements of chamber music. The band is also comparable to Carpe Diem.

This is fabulous, very intricate and occasionally dark, somewhat Canterburyish kind of stuff. The pieces are mellow and rolling as well as intense and energetic, the writing is excellent, and there is over 70 minutes of great music on this Musea CD. The instrumentation is based around a beautiful clean electric guitar, delicate and tasteful drumming, bass, violin, and oboe/flute with a bunch of other strings and woodwinds helping out. At some points it veers towards a 20th century classical style, where the drums drop out and there is some great woodwind and string polyphony, but for the most part the drumming and bass keep the music moving along at quite a palatable clip for most prog listeners. This album creates the same mysteriously peaceful kind of feeling I get from Laurent Thibault, and also at times reminds me of the group Oregon. The Canterbury component of the sound is kind of a mix of early Henry Cow, Hatfield, and National Health, though you shouldn't get the impression that Noetra goes off on "Dreams Wide Awake" type jams. The intensity on Neuf Songes is created by the wonderful composition, dynamics, and controlled dissonance.


The word is that the music of Neuf Songes was destined for release on ECM Records, but it just never quite happened. A shame, really, because not only would this older material from Lapouge’s Noëtra ensemble have fit in perfectly with ECM’s output back in the 80s, it might’ve had an impact on the label’s existing stable of musicians. It has the dramatic orchestration and the introspective interludes, the prog-jazz hopscotch precision and the jazz-folk fusion that embodied a segment of the modern jazz scene of the 1980s… but Noëtra brings all of those elements together in remarkably vibrant ways. It just resonates brilliantly. And how nicely it would have sat beside ECM Records works by Eberhard Weber, Steve Tibbetts and Miroslav Vitous.

Thankfully, Lapouge has loaded this album up on his Bandcamp page and made it accessible to present-day listeners. I gotta say, it holds up remarkably well. This music’s ability to enchant hasn’t waned even a little bit.

Guitarist Jean Lapouge was born in 1953 and was the leader of prog-rock group Noëtra, late 70s, early 80s. (jeanlapouge-english.blogspot.com/.) He published in recent years a handful of discs on trio, using different instrumentation. (www.jeanlapouge.net) ... more

Bandcamp Daily  your guide to the world of Bandcamp